This tanpatsu celebrates the tenth year of this popular Japanese anime, originally a manga created by Aoyama Gosho. The story takes place when Shinichi was still a high school student. The talented young detective Kudo Shinichi receives a message: "I will kidnap one of your classmates during your class trip." Shinichi is going to find out the truth. 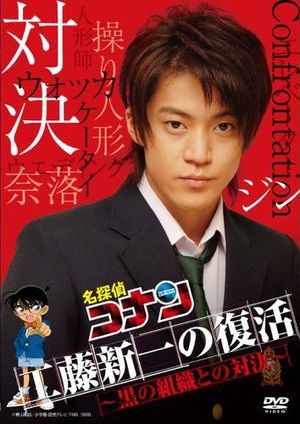 Kudo Shinichi no Fukkatsu! Kuro no Soshiki to no Taiketsu

Conan attends a party for the "Miss Japanesque" awards, where he happens to eat a cake that temporarily transforms him back into Kudo Shinichi. While there, a murder takes place and he has to solve the case. The special will also feature the first live-action appearance of the Black Organization. --Tokyograph 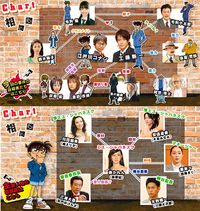 In this town a legend exists, claiming that a gigantic bull-headed shrike attacks the townspeople and kills them. The town was about to hold a festival in 3 days to put the giant bird's spirit to rest.

While being led on a tour of the bull-headed shrike Shrine by Sonoko's parent's friend, Mr. Wakura, a crime related to the legend occurs. Starting with Kosaka, member of the Wakura family are slowly murdered in the same way... 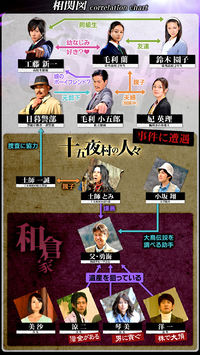 The drama series takes place before the high-school detective, Kudo Shinichi, is poisoned by the Black Organization which causes his body to shrink and became known as the elementary-school student Conan.

Set in the mid-night city where many dangerous games wriggling around, Shinichi, Ran, and Kogoro wakes up trapped in a white cubical cell (the ‘white room’) with no recollection of how they arrived there. A letter reveals an admirer of Shinichi’s detective work placed him there to test his deduction abilities. Each white room contains a panel device which when a keyword connected to the case is entered, grants them further access of the room.

First challenge, the panel device with the date, June 24, 2010, suggests Shinichi should recall an investigation that occurred on that day, when a photographer murders his lover... --NTV 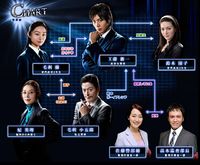 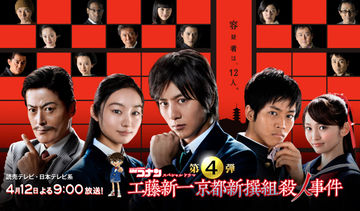 Kudo Shinichi and Mori Ran are invited to the set of a jidaigeki in Kyoto. On their airplane ride to Kyoto, a murder mystery arises. As well, when they finally reach the set in Kyoto, they become involved in another murder mystery. Will Kudo Shinichi be able to solve the mystery?... 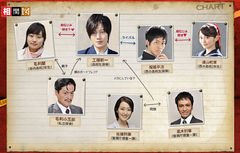