It is a sunny day in early summer. Kajita Nobuo, the personal chauffeur of chairman Imada Yoshichika of the Imada Group, is knocked down by a bicycle and killed on the spot. The cyclist flees the scene. Sugimura Saburo of Imada Group’s public relations office is asked by his father-in-law Imada to attend Kajita’s wake and funeral service. At the funeral parlour, Sugimura conveys his father-in-law’s words to Kajita’s two daughters Satomi and Riko. “If there is anything that I can do to help, I want you to count on me.” In fact, Kajita was also like a benefactor to Sugimura. Eight years ago, Sugimura who became acquainted with Imada Nahoko by chance, went as far as to propose to her after dating. Nahoko naively consented. It was after that, that he learned that her father was in fact the chairman of the Imada Group. This marriage was also opposed by his family, but when Sugimura obtained permission to marry from Nahoko’s father, it was Kajita who congratulated him. Sugimura is still grateful for those simple words. He attempts to return this kindness to Kajita’s daughters by looking into his death, but the older daughter Satomi appears passive and reluctant. Then, Riko confides that she wants to publish an autobiography on her father in order to catch the criminal. However, Satomi is against it and appeals to Sugimura when they are alone. Their father has a dark, unsavoury past which she does not want her younger sister to know. According to her, Nobuo drifted from one job to another when he was young and even tried his hand at work that was not respectable. Satomi remembers that she was kidnapped when she was a child, and the kidnapper had blurted, “It’s your father’s fault. I’ll kill him.” Satomi’s kidnapping was when her father had quit his way of life, and was working hard at a company called Tomono Toys. A short while before Nobuo died, he had told Satomi meaningfully that he had to put something right before she gets married. There is also the mystery of why Nobuo had gone to what would become the scene of the accident, by himself in the middle of Golden Week. Sugimura goes to Tomono Toys in order to search for the truth. This is how he is gradually drawn into the “poison” related to Kajita’s accident … … --JDramas 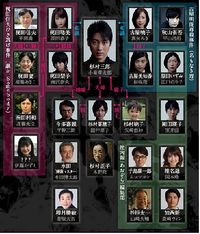