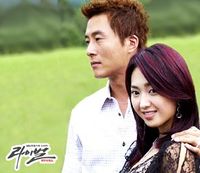 So Yoo Jin is a poor girl that aspires to be a golf star. When her brother, Park Chul, runs away after leaving behind a large debt, Kim Jae Won comes to collect the money. So Yoo Jin promises to pay the money once she becomes a golf star, and so Kim Jae Won always looks over her like a 'soo ho chun sa'. more...