A humane comedy about a breadwinner of the family who is a father at home but a gang boss outside. The first episode comes in November. 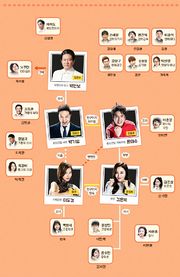