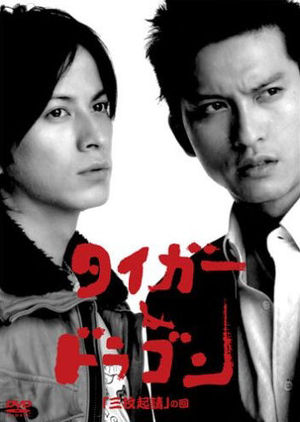 The tale of Tiger & Dragon revolves around Rakugo, a traditional form of Japanese comedy that can look back on an impressive 400 year long history. Nagase portrays the Yakuza follower Toraji who goes to a Rakugo performer to collect debts, while Okada plays Ryuji a talented Rakugo player who wants to leave behind the old fashioned world of Rakugo for good. Shortly afterwards these two very different characters happen to cross paths through a girl named Megumi and that's when all the real trouble starts igniting...

This drama continues off from where the special that aired early this year, 2005, ended. It's about a yakuza member, Toraji (Nagase Tomoya) who has to collect payments from a man whose son used the money to open an eclectic clothing store. However, Toraji discovers rakugo (traditional Japanese comical monologues) through the man who later teaches him the art. The situations between the characters were hilarious and the comedy was very refreshing. I really enjoyed how the director was able to create a seamless transitioning between the rakugo story-telling - the re-enactment of the story itself - and then the current drama happenings. It was very innovative and impressive to say the least. Each episode focuses on a different rakugo story and it was surprising that because of this factor, the series still didn't seem episodic, but still proceeded at a nice pace.

The main characters, Toraji played by Nagase Tomoya and Ryu played by Okada Junichi are both memorable and funny. They each had a specific character type and firmly stuck to it throughout the drama. The other actors also did a wonderful job. The dialogue in this drama was refreshing and witty. Overall, a great drama!