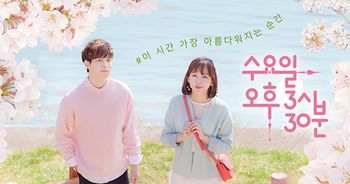 “Wednesday 3:30 p.m.” tells the story of a woman who was dumped by her boyfriend and tries win to win back his heart by making him jealous. With her close male friend, she manipulates her social media to create a fake “lovestagram” (love + Instagram). The two characters are childhood friends, and a sweet romance will unfold as they begin to live together. --MyDramaList